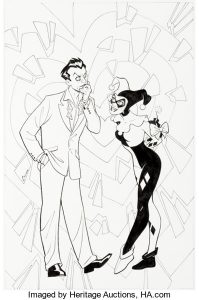 The Comics & Comic Art Signature Auction, offered by Heritage Auctions, is anchored by a large collection of comics, including over 1,000 published between 1938 and 1959. Included in this sale is an early edition of Marvel Comics #1 from a Windy City provenance. This piece was first introduced to the market by Chicago dealer Gary Colabuono, who acquired the collection from a mailman in Pennsylvania. This man built one of the largest vintage comics collections by purchasing every #1 issue he could find.

Also under the gavel are examples of original comic book art, such as the Robert Crumb “Stoned Agin!” ink drawing, the location of which has been unknown since the early 1970s. This piece has been in the hands of one collector since that time when Crumb traded it in exchange for old blues records. Beyond comics and original art, this auction will also include magazines, memorabilia, vintage video games, and more. View any of these lots and register to bid at Heritage Auctions.