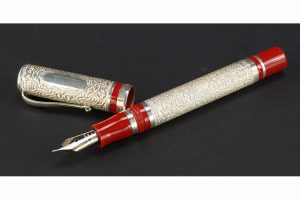 The upcoming Collections auction, offered by Susanin’s, is anchored by pens, coins, timepieces, toys, and ethnographic art. One of the featured lots is a Buddy “L” Express Line toy truck. The toy line was named after the son of Fred Lundahl, the founder of the company. Lundahl began his business by creating toys for his son, but he quickly expanded into a flourishing business during the 1920s and 30s.

Also up for bid is a Montblanc Hemingway fountain pen, the first of Montblanc’s limited edition Writer’s Series of pens. Montblanc designed the coral red and dark brown pen in the style of the 1930s, which was when Ernest Hemingway’s writing career began to accelerate. The cap bears Hemingway’s engraved signature, and the nib is made of hand-cut 18-karat gold. Also available is a Montblanc Agatha Christie pen from the same series.

Among the presented coins are South African Krugerrands, an Isle of Man platinum coin, and a  $10 liberty-head eagle gold coin from 1907. Timepieces will include an Ullmann Shanghai silver pocket watch from Hong Kong. Baskets, rugs, and sculpted pieces will be presented as well. View any of these lots and register to bid on LiveAuctioneers.