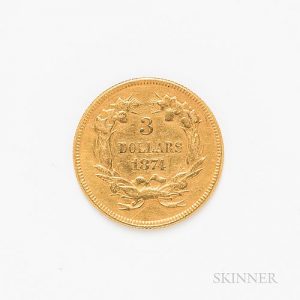 In the late 19th and early 20th centuries, U.S. one-cent coins were often in high demand. During the Civil War, they were hoarded for their nickel, and by the 1900s, coin-operated machines boosted the coin’s need. The one exception to this rise, though, came in 1877, when a poor economy limited both their demand and production. An Indian Head cent coin from that low-production year highlights the upcoming Coins & Currency event, presented by Skinner. The auction house notes that this example of the 1877 Indian Head cent still displays much of its original mint red.

Early American coin collectors can consider the 1662 Massachusetts Oak Tree twopence on offer in this auction. Ten years prior, in 1652, John Hull and Robert Saunderson began making America’s first silver coins. After producing a few simple sets of coinage, the pair eventually made the Oak Tree twopence. This example has an even gray toning and a fully-visible tree, according to the auction house. Those interested in British coins will find an Elizabeth I gold half pound coin. The coin was originally produced in the 16th century to provide more denominations due to inflation. For more information about this or any other lot, visit Bidsquare and register to bid.