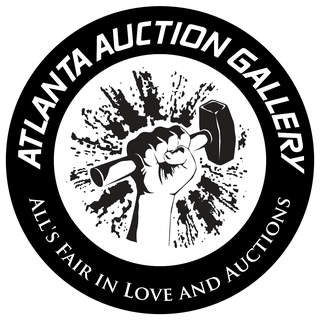 A train from Normandy with a large bellow of smoke and steam rising in the air is depicted in an oil painting attributed to Claude Monet. A large crowd of people surround the train. A closer look shows the colorful details of the street and people. Monet’s signature verifies that the painting dates back to 1877. The painting is housed in an ornate carved wooden frame with detailed information on the provenance written in Romanian. The painting was once owned by former French President Valéry Giscard d’Estaing, who gifted it to Dr. Ana Aslan in 1975. It changed hands several times before being passed down through the descent of a Romanian Army General to the current owner. The painting is available in the upcoming Marvelous Mid Century, Pottery & Paintings auction, presented by Atlanta Auction Gallery.

Among the available pottery lots, a flattened ceramic bottle with a bird motif by American ceramist Michael Simon is notable. The MS stamped bottle is slip-glazed with a single squared shoulder. Like most of Simon’s salt-fired stoneware, it is functional and decorative with simple nature-based geometric motifs like fish, birds, trees, and linear, abstract designs. Another antique piece comes from 16th to 17th-century Tibet. It is a storage chest with a front panel depicting two dragons holding an offering bowl surrounded by a repeating ‘Kati rimo’ brocaded design influenced by Chinese silks from the Yuan and early Ming dynasties. The entire chest is clad in brass banding with the original lock clasp. Find the listed items and more online auctions on Bidsquare.