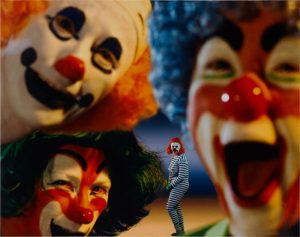 Explaining the concept behind her famous Clown series, photographer Cindy Sherman said, “When I started doing this series I started thinking of clowns as a whole race of people, but people just like anyone else. I thought I should do a housewife clown, a clown at the gym… I was trying to think of everyday shots of clowns just going about life.” The upcoming Sotheby’s auction presents Untitled #425, a mural-sized chromogenic print from Cindy Sherman’s Clown series. The available multi-layered image is an example of Sherman’s photographic experiments using new technologies.

Another highlight is a photograph titled Icestorm by Wolfgang Tillmans. The featured landscape photo depicts an electric yellow background and red blasts. It blends abstraction and realism, as well as Tillmans’ experimental light play. The process involves subjecting the negative to light, enhancing it with filters, and layering it with colors and calligraphic elements. The auction also celebrates women photographers in the world of media. Showcased are photographs by Uta Barth, famous for her optical illusion and perception-filled works. The available laminated chromogenic print from Barth, titled Field #9, uses a blur effect to create an illusion of time and space. The auction also presents works by Matthew Barney, Thomas Struth, Catherine Opie, Christopher Williams, Gregory Crewdson, and Shirin Neshat. Interested collectors can explore the entire catalog and register to bid online on Sotheby’s.