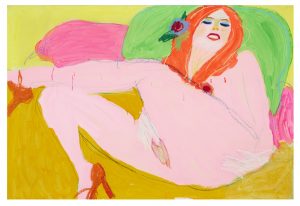 Christie’s upcoming auction will explore the world of contemporary Asian art with works from Walasse Ting, Tatsuo Miyajima, Aya Takano, Yayoi Kusama, and others. One of the leading lots is Walasse Ting’s acrylic painting. Ting was a 20th-century Abstract Expressionist celebrated for his vibrant palettes on rice paper. With fluorescent colors and expressive brushstrokes, his works often depicted women, flowers, parrots, horses, and fish. Ting’s union of Chinese and Western aesthetics defined his work throughout his career. The offered lot, titled Life Is Just a Bowl of Cherries, is an example of his trademark style.

Another featured work comes from Chinese painter Liu Dahong. He rose to prominence in the late 1980s. Liu’s work creates satirical versions of historic events, referencing both Chinese and Western cultures. He attempts to evaluate political, cultural, and social conflict, particularly of the Cultural Revolution and post-Cultural Revolution period. In the available piece, Liu shows two parts of the same world. Those interested in this or any other contemporary Asian artworks can register to bid on Christie’s.