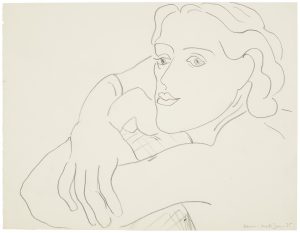 French artist Henri Matisse (1869 – 1954) had a lasting influence in painting, draughtsmanship, printmaking, and sculpture. His mastery over color made him a prominent figure in the world of modern art. Femme accoudée (Lydia), a crayon on paper by Henri Matisse, is a key highlight of Christie’s upcoming auction. Matisse strongly believed that drawing was the most unadulterated and simplest way of expressing his creativity. The black Conté crayon artwork exemplifies this preference.

Bédouine. Figure aux bandeaux (1947), an aquatint on wove paper with Matisse’s stamped initials, is another leading lot. The artwork bears bold black lines on unprinted white paper. The artist learned innovative printmaking techniques throughout his lifetime. He began working vigorously on aquatints only when he was well into his seventies.

The sale also features Intérieur, la lecture, a lithograph on Chine paper. Matisse executed the piece in 1925 and signed it in pencil. Another notable lithograph from 1923 is Jeune fille assise au bouquet de fleurs. Both artworks depict a striking texture, intricate detailing, and complex patterns. Each available drawing and print by Matisse formerly belonged to the estate of Jacquelyn Miller Matisse. To view the complete catalog and register to bid online, visit Christie’s.