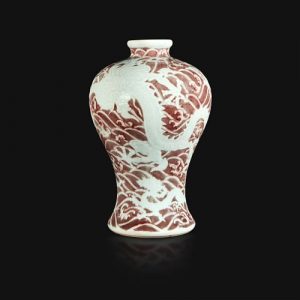 Mirroring the curves of the human body, Chinese meiping vases usually included a thin neck juxtaposed against a rounded shoulder. Traditionally, the vessels carried plum tree blossoms. Highlighted in Freeman’s upcoming Asian Arts sale is a meiping produced sometime during the reign of the Yongzheng Emperor (1722 – 1735). The vase’s decorations, which include thrashing waves and the flowing bodies of dragons, accentuate the meiping’s curves.

Chinese vase collectors can also consider a yuhuchunping produced during the Ming dynasty. While meipings are known for their pronounced shoulder, yuhuchunpings have a distinctive pear shape. On this yuhuchunping, viewers will notice a prominent lip at the top of a long and narrow neck. Floral decorations circle this yuhuchunping, all coated with what Freeman’s calls a “sea-green glaze.” Bidders will also find a densely-decorated folding screen from the 17th or 18th century. Countless citizens and immortals gather to meet an emperor who stands in the middle of the screen. This piece is a Coromandel screen and was likely designed for export to Europe. Coromandel works got their name from India’s Coromandel Coast, where they often began their voyage. Register to bid and view each of the lots on Bidsquare.