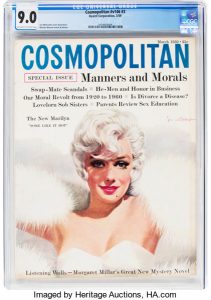 The CGC-Certified Magazines Online Auction, offered by Heritage Auctions, contains several early and rare editions of magazines and comics, especially early editions in the horror and monster genres. Among the featured comic issues is a copy of Vampirella #1, with a Frank Frazetta cover and frontispiece. The vampire character, Vampirella, first appeared in this issue of the black-and-white magazine. Beyond this first issue, some later releases are available in the sale as well.

In addition to comics, this auction is anchored by several issues of magazines such as Playboy and Modern Man. In particular, many issues and duplicates of Playboy are up for bid. One of the featured releases is the rare “Red Star” version of Playboy #1. Marilyn Monroe is featured on the cover and is shown as the “Sweetheart of the Month” in a two-page poster. There are several copies of this issue for sale, one of which is signed by the publisher, Hugh Heffner.

Also up for bid is a copy of Sports Illustrated Volume 1, Issue 1. As implied by the issue number, this edition was the first release of the popular magazine. The cover photo shows Hall of Fame slugger Eddie Mathews. Another feature of this issue was 27 replicas of 1954 Topps baseball cards.

Other magazines in the sale include early issues of MAD Magazine, The Family Circle, Cracked, Photoplay, Cosmopolitan, and more. Available comic releases include copies of Pussycat, Eerie, Planet of the Apes, Creepy, and The Spectacular Spider-Man. To view any of these lots and register to bid, visit Heritage Auctions.