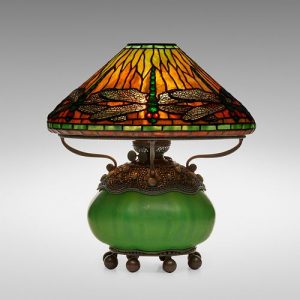 Some hard-to-replicate ceramics by George Ohr, Taxile Doat, Viktor Schreckengost, and Josef Hoffmann will be available in Rago’s Early 20th Century Design auction. A rare vase from the French potter Taxile Doat is among the leading lots. The vase mimics the shape and colors of a gourd. Skilled in pâte-sur-pâte (paste on paste) technique, Doat helped popularize the Art Nouveau style in pottery. Like many American and European artists of his time, he found inspiration in Japanese art.

Also highlighted in the auction is a Tiffany Studios dragonfly table lamp. It features a rare pumpkin base with bronze pebble decoration. The pumpkin base is Favrile glass developed by Louis Comfort Tiffany in his studio in Queens, New York. Tiffany’s Favrile glass won several awards after its invention, including a grand prize at the 1900 Paris Exposition. The upcoming auction includes more than 200 lots of ceramics, metalwork, lighting, and decorative arts. View any of these items and place a bid online on Bidsquare.