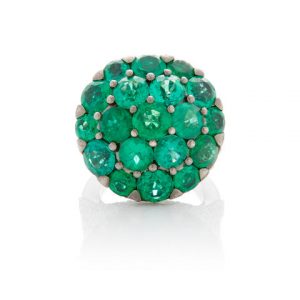 Sometimes called the “King of Diamonds” or the “New Harry Winston,” London-born jeweler Laurence Graff is known for his use of rare diamonds and colored gems. A self-taught gemologist, Graff began his career as an apprentice at a local shop. In 1960, he founded Graff Diamonds and became the first jeweler to receive the Queen’s Award. Graff’s jewelry has since been worn by the likes of Elizabeth Taylor, Angelina Jolie, Anna Kendrick, Oprah Winfrey, and the Sultan of Brunei. The upcoming California Jewels sale, presented by Bonhams, features several Graff jewelry pieces, including a pair of emerald and diamond pendant earrings. Set in 18-karat white gold, this piece features round emeralds and diamonds.

Another featured lot from the event is a Cartier Love bracelet. Designed by Aldo Cipullo in the brand’s New York workshops in 1969, the Love bracelet is oval-shaped to match the curve of the wrist. Made of 18-karat gold, the available piece features the classic screw motifs and comes with a screwdriver. A ruby necklace designed in an open-work choker style is offered as well. The event also includes jewelry by Cirari, Tiffany & Co., and David Webb. View any of these lots and register to bid online on Bonhams.