California and Western Paintings and Sculpture 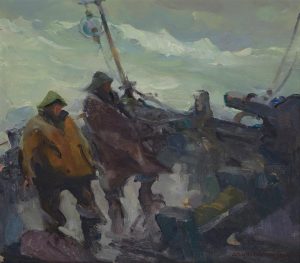 Bonhams held the first-ever dedicated sale of Californian and Western Paintings on June 1980. Keeping with their long-standing tradition of consistently leading the market, on August 6, they will be presenting an exceptional auction of California and Western Paintings & Sculpture. It will include 174 works by some of the most celebrated California impressionism artists such as August Gay, Selden Connor Gile, Armin Hansen, Edgar Payne, EangerIrving Couse, Nicolai Fechin, among many others.

Leading this sale is Joseph Raphael’s Tea in the Orchard from the John H. Garzoli Collection. Tea in the Orchard is lauded as ‘an example of true impressionism carried to its farthest point to be safe'”. A native of San Francisco, Raphael is considered to be among the best Western painters. Also included in this auction is August Gay’s A Fishing Boat, circa 1930. Known for portraying more avant-garde art, the painting is a wonderful depiction of that artistry. Gay was a Society of Six member, a group of artists who painted an exhibited together in and around Oakland, California in the 1910s and 1920s.

Additional highlights include two magnificent bronze statues by Charles M Russell illustrating traditional Western culture. The first is a beautiful depiction of a Blackfoot Indian on horseback carrying a medicine pipe and is estimated to reach $100,000 at auction. The second bronze statue by Russell was modeled in 1901 and is described as a Piegan scout of the Blackfoot raiding party. Visit Bonhams  to see view these artists, many breathtaking landscapes of California, such as Alison Skinner Clark’s La Jolla Seascape, and much more