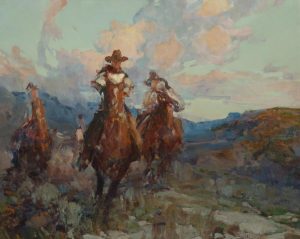 Featured in the upcoming California & American Fine Art event, presented by John Moran Auctioneers, are several paintings representing the American West and Southwest. This includes a piece by W. Herbert Dunton showing Mexican vaqueros roping brown bears in New Mexico. Dunton spent his summers in Taos, New Mexico, where he illustrated the frontier lifestyle. He was aware that the Wild West era was quickly fading. “In another 25 years, the old westerner will have gone with the buffalo and the antelope,” he once wrote. “I’m going to hand down to posterity a bit of the unadulterated real thing.”

Bidders interested in early 20th-century paintings of the American West can also consider Frank Tenney Johnson’s oil study for Dust Stained Riders. The piece shows three cowboys racing across the California plains. In addition to the oil study, the lot comes with several letters, including a 1963 note from Johnson’s fellow artist James Swinnerton. He wrote to discuss how such field studies often capture aspects of the subject that are later lost in the final composition. Also among the highlighted lots is a wildflower landscape by Granville Redmond. The painting was acquired directly from the artist in 1930 by the Abbey Picture Framing company. Those interested in this or any other piece can register to bid on the John Moran Auctioneers website.