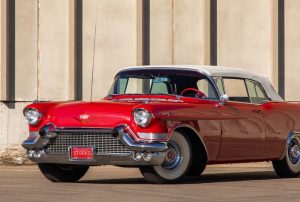 Founded by Henry Leland, Cadillac was named after Antoine de la Mothe Cadillac, a French explorer who founded the city of Detroit. Shortly after its incorporation in 1902, the company introduced the idea of interchangeable parts in the automotive industry, which led to the emergence of modern mass production of automobiles around the world. For their contribution, Cadillac was awarded the Dewar Trophy from the Royal Automobile Club of England. A 1957 Cadillac Eldorado Biarritz convertible is among the highlights of the upcoming Kansas City 2020 sale, offered by Mecum Auctions.

A Chevrolet Corvette convertible is also presented in the auction. Produced in 1966, this automobile has a Milano maroon and black interior and four-speed transmission. Also offered in the sale is a Chevrolet Bel Air. This model, which has a 265/225 horsepower engine, was launched in 1950. H&H Classic Parts writes, “America fell in love with the Bel Air… The ’55 Bel Air transformed into one of the most recognizable American cars of all time.” To view more items and register to bid online, visit the Mecum Auctions website.