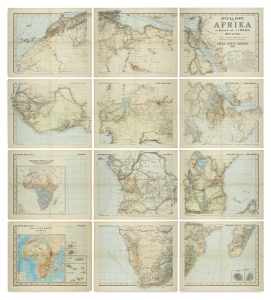 The Maps & Atlases, Natural History & Color Plate Books auction, offered by Swann Galleries, is anchored by the rare and early maps and atlases being placed under the gavel. The featured Admiral’s Map is a 1513 edition of Ptolemy’s Geographiae, a compilation of the geographical knowledge of the second century Roman Empire. This is one of the earliest publicly available maps that included the Americas. The map shows parts of the Florida peninsula and the Gulf of Mexico. Cuba and Hispaniola are labeled “Isabella” and “Spagnolla,” after the queen of Spain. Also visible is the South American continent, represented as a single mass with limited coastal information. The interior landmass is labeled “Terra Incognita.” Also represented are Western Africa, Iberia, a part of England, and a mythical island called Hy Brasil.

Also up for bid is an archive of illustrated Japanese diaries written during World War II and the following years of occupation. They were written by a young man named Nishigori. Included in this lot are 15 personal diaries written primarily in Japanese script, with partial English and narrative illustrations throughout. At the start of the series, Nishigori was just 12 years old, and he continued writing through the age of 28. His reflections and drawings relate to the Second Sino-Japanese War, World War II, his family relationships, his religious beliefs and experiences, and his Japanese pride and nationalism. Later entries were written almost entirely in English.

A complete later edition of Münster’s cosmography, a collection of the geographical knowledge of the world in 1544, will also be presented. Maps included in the cosmography span two perspectives on the world (modern and Ptolemaic), as well as four continents. Depictions of London, Paris, Venice, Lisbon, Florence, Frankfurt, Constantinople, Jerusalem, and Cairo are also visible. There are many color illustrations up for bid from Currier & Ives, John James Audubon, Pierre-Joseph Redouté, and others. View any of these lots and register to bid at Swann Galleries.