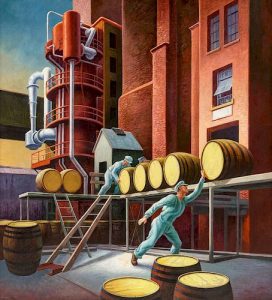 The paintings, including Thomas Hart Benton’s “Whiskey Going into the Rackhouse to Age or Whiskey Barrel,” also appeared later in Life Magazine. During his career, Benton professed himself an “enemy of modernism,” and his representational work became known as Regionalism. His Whiskey Barrels painting was in storage for many years and will likely see the highest bids in the sale, estimated between US $600,000 and $800,000. Other paintings by lesser-known yet talented artists from the same collection are relative bargains with opening bids as low as $1,000.

Though the enemy of modernism may be featured in the sale, an abundance of the remaining works would likely be classified as at least friendly, including works by French Impressionists Henry Moret and Pierre-Auguste Renoir, as well as Danish-French Neo-Impressionist Camille Pissarro.

Beyond the whiskey barrel and European artists, there are also many fine works by Americans. Like the evocative “Winter Landscape” by American Impressionist Fern Isabel Coppedge. Coppedge was well known as a landscape artist who often painted nearby villages and farms of Bucks County blanketed with snow. View all these lots and register to bid on Bidsquare