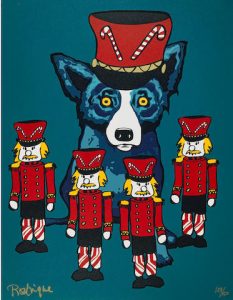 Mr. Brainwash, also known as Theirry Guetta, rose to fame after Banksy, a fellow street artist, made an acclaimed documentary about him.  Exit Through the Gift Shop follows the evolution of the street art movement. In his work, Mr. Brainwash uses elements from Pop Art and raw street art to create large exhibitions and collaborations. His Einstein no. 1 incorporates both. Created in 2015, this screenprint features Albert Einstein’s image amid the cacophony of modern life. Einstein, the central figure, holds a sign that says “Love is the Answer,” surrounded by Mickey Mouse cartoons. This work is the leading lot of the upcoming Deck The Walls auction offered by Bonhams.

Extra Good Boys and Girls, created around 1976 by Norman Rockwell, is another notable lot. The Saturday Evening Post cover illustrator is best known for his humorous depictions of American life. This piece portrays Santa sitting on a ladder and tracing his path across the Pacific Ocean and the Americas on a map. Additional lots include prints from Karel Appel, Keith Haring, and Robert Indiana. Browse the entire collection and register to bid on Bonhams.