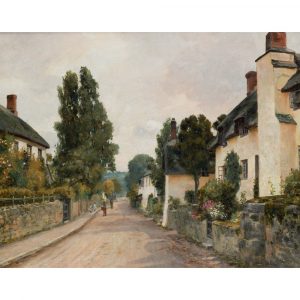 John Piper was known for his landscape scenes of ruins, painted in the style of the 19th-century English Romantics. Piper’s wartime works became widely recognized after World War II. The artist worked on a series of street scenes that showed the destruction of iconic British churches, monuments, and buildings due to German bombs. He also worked with lighter subjects, including flora and fauna. The upcoming Olympia Auctions event presents Sunflowers & Hostas, a floral still life painting by Piper from 1986.

Another featured lot is a watercolor painting by Albert Goodwin. His artistry was recognized at an early age by his master Ford Madox Brown. He believed that Goodwin would become “one of the greatest landscape painters of the age.” Goodwin was later acclaimed for his watercolor paintings. Many of his works show the influences of Turner and the Pre-Raphaelite Brotherhood. The auction also offers an oil painting by English artist Serge Ivanoff. His portraits were collected by the likes of Paul Valéry, Eleanor Roosevelt, and Pope Pius XI. The featured painting is a portrait of two young boys with a teddy bear. Interested collectors can explore the full listings and register to bid online on Olympia Auctions.