Books and Documents on the Independence of Mexico, the First Empire, and the Republic 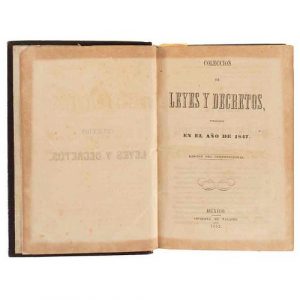 Morton Subastas’ upcoming auction will offer a selection of books and documents that reflects the Independence of Mexico, the First Empire, and the Republic. The lots include papers on the freedom to trade, independence papers, lithographs, and more. Leading the catalog is a document on the Act of Independence of the Empire signed by supporters of the independence cause. This lot represents one of two copies of the original text, signed on September 28th, 1821.

A letter from Miguel Hidalgo y Costilla extending an invitation to Colonel Narciso de la Canal is also available in the sale. The letter discusses Hidalgo’s hopes for the Colonel to join the Armed Movement: “I am not afraid to invite VS to join his powerful influences, participate in the glories of our homeland carrier.” Additionally, a collection of first edition lithographs by Mexican artists, including C. Castro, J. Campillo, L. Auda, and C. Rodríguez, will be available. Titled Mexico and Its Surroundings, this lot was created under the direction of Decaen. To view these lots and more, visit Bidsquare and register to bid.