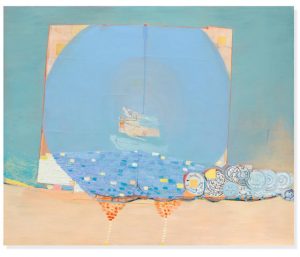 Bonhams’ September Post-War & Contemporary Art auction particularly highlights a 1999 oil painting from Amy Sillman. After Sillman moved to New York in 1975, she began studying the relationship between abstract and figurative painting styles. Many of her following works started blending humor with vibrant imagery. Titled Passage, the offered painting shows abstract figures floating towards the blue sky. According to the lot essay, “Passage reflects a personal shift in subject matter, created during a period of personal losses in the artist’s life, which is poetically and delicately suggested and explored on the canvas.”

The sale also showcases an inkjet print from Wolfgang Tillmans. Active since the 1990s, Tillmans became one of the most prolific contemporary artists in the 20th century. His photographs offer documentation of clubs, youth, and LGBTQ+ culture. In the present lot, the artist shows the wings and engine of a jet plane. View the full auction catalog and register to bid online on Bonhams.