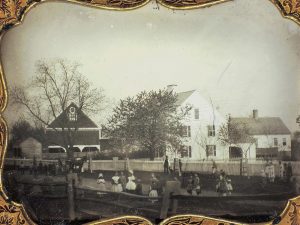 Daguerreotypes, made using the first commercial photographic process to be developed, were invented by Louis Jacques Mande Daguerre (1787–1851). Each daguerreotype shows a detailed and sharp image on a silvered copper plate. Though daguerreotypes became extremely popular around the 1840s, they were very expensive; only the wealthy could afford to buy them. Although portraiture was the most popular use for them, daguerreotypes also captured still lifes, documentary subjects, and natural phenomena. Several daguerreotypes are highlighted in the upcoming Exciting Photographs – History and Art auction, offered by Be-Hold.

A quarter-plate daguerreotype showing children playing in a schoolyard during late fall or winter stands out in this sale. The children, wearing smocks that are typical of the Quakers, play beside a horse at the base of a tree. A group of seven albumen prints belonging to a 19th century Scenes in Haiti album is another notable lot. Other available works include an 1863 print of Cathedrale de Moulins, Narthex by Charles Marville, as well as several vintage gelatin silver prints of the Bolshevik Revolution in Russia. To view the full catalog and register to bid, visit Invaluable.