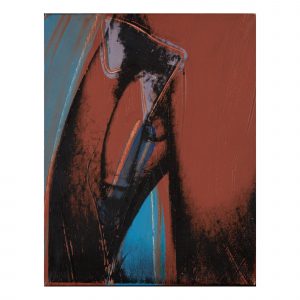 The first gay pride event was a riot. On June 28th, 1969, violent demonstrations broke out in New York City after a police raid of a popular gay bar, the Stonewall Inn. To commemorate the 50th anniversary of the groundbreaking Stonewall Riots, Sotheby’s is offering Bent., an auction whose lots represent the experience of LGBT community from the 19th century to present. The auction primarily consists of paintings, photographs, and manuscripts. The most notable book in the auction is an 1867 copy of Walt Whitman’s Leaves of Grass. Often considered to be the father of American poetry, Whitman’s Leaves of Grass was not only one of America’s first major contributions to poetry but also a distinctly queer text that inspired major literary figures such as Allen Ginsberg. Speaking of Allen Ginsberg, a portrait of his life partner, Peter Orlovsky, is also among the lots with the highest estimated value in this auction. Orlovsky and Allen Ginsberg were foundational figures of the Beat Generation and this painting, a fully nude portrait by Robert Lavigne, is a reminder of the pride and lack of inhibitions that made the Beats distinct. Andy Warhol, a leading figure in the Pop Art movement and another LGBTQ icon, is also represented in this auction with several pieces. This includes a negative for a piece called “Self-Defense”, a satiIre of over-the-top advertising. Among the photography with the highest estimated value is Catherine Opie’s “Dyke”. Part of a larger series titled Portraits (1993-1997), this is a showcase of the tattoos, earrings, and body types of the LGBT community. Interested bidders can register to bid on Sotheby’s website.