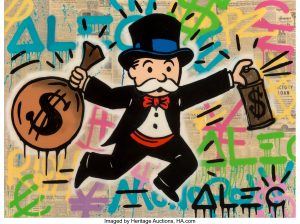 Growing up in Jersey City, Brian Donnelly’s introduction to art was through graffiti rather than museums. He first went “bombing,” a graffiti term for tagging multiple public areas, in middle school. Donnelly’s early tags would eventually become his professional name as an artist: KAWS. The upcoming Beautiful Losers Collection, presented by Heritage Auctions, will bring work by KAWS and other artists inspired by alternative art to auction.

KAWS’ vinyl Companion figures are highlighted in this sale, particularly his Dissected Companion. He began producing Companions in 1999 after a trip to Japan, combining the style of Japanese figurines with his street art background. The Companion available in this auction is split down the middle. On one side is a black, dead Companion, and on the other is its neon-colored organs.

In his personal work, KAWS often juxtaposes his Companion character with pop culture references. Available in this auction is a Companion figure in Darth Vader’s suit. The project was a 2007 collaboration between KAWS and Lucasfilm Ltd. A Companion in the style of Astro Boy is also among the auction’s highlighted lots. This figure buries his head in his hand, as if embarrassed.