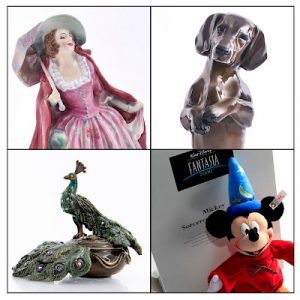 In 1933, Disney released “Three Little Pigs”, a short-animated film. At the time, it was Disney’s crowning achievement. The company would, of course, find more than a little success later with an animated mouse. One of the lots in the upcoming August No Reserve auction, offered by Whitley’s, commemorates the film’s success, a figurine of the Big Bad Wolf himself. Produced as part of a limited edition to celebrate the film’s 60th anniversary, the figurine comes with a collector’s box.

The No Reserve auction features collectibles and decorative arts not only from Disney but also from other signature brands in the field. This includes Royal Doulton, Swarovski Crystal, and Lladró. An eye-catching crystal dragon is among the most notable pieces from Swarovski. The piece is part of a limited-edition Fabulous Creators set from 1997. Bidders should also consider a stoneware raised decor vase from Royal Doulton. The English ceramic company made this vase between the late 19th and early 20th Century. Floral artwork in blue cobalt surrounds the vase.

As the auction’s name implies, there is no reserve. There may be opportunities for collectors to pick up pieces for less than their estimated value. Many of the most notable lots in the auction, including a three-piece figurine set of ballerinas and geese by Lladró, have opening bids of only $10. Those interested in any of these pieces can register to bid online on Bidsquare.