Auction of Books by Explorers, Travelers, Maps, and Landscapes 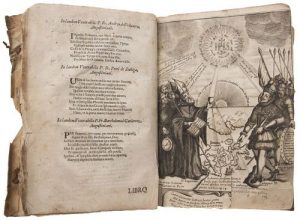 John Phillips was a British mining engineer whose work brought him to Mexico in 1840. As he traveled through the country, he discovered its landscape. Together with a young British lithographer named Alfred Rider, Phillips published Mexico Illustrated in Twenty-Six Drawings. The work kindled interest in distant lands among Europeans. Seven lithographic works by John Phillips and Alfred Rider are featured in the upcoming Auction of Books by Explorers, Travelers, Maps, and Landscapes sale, presented by Morton Subastas. The lithographs featured in this auction depict the tropical landscape of Mexico in a new light.

Another work that was widely read and was well-received by Europeans was titled Amerika, sometimes called The New and Unknown World: or Description of America. The publisher was Arnoldus Montanus, a Dutch explorer, missionary, and theologian. As he had never traveled beyond Europe, his knowledge about the New World was based on descriptions from other travelers who painted imaginary images of the Americas. Similar lots, along with maps and manuscripts from the library collection of Roberto L. Mayer, are available online at Bidsquare.