Auction of Books and Documents of History of Mexico 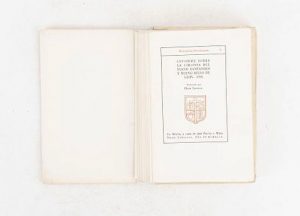 The Auction of Books and Documents of History of Mexico by Morton Subastas is a collection of historical texts from the pre-Hispanic time to the First Republic. There are several that are gorgeously designed and illustrated, including a facsimile edition of Codex Laud, Paintings of Death and Destinations. The Borgia Group Codices, a group of pre-Columbian codices are distinguished by their religious or spiritual content. Though a part of the Codex Laud is thought to be missing or lost, it is nevertheless considered an important piece.

The highest valued lot is the Conjunto de documentos manuscritos e impresos relacionados con José María Cos. It is a set of manuscripts and printed documents related to José María Cos. Cos was a participant in the Mexican war for independence from its very earliest days. He also helped draft the Constitution of Apatzingán, which defined early law that governed the Mexican Republic. His contribution to numerous events of the new Republic makes these documents highly desirable.

A further pictorial and perhaps unexpected lot up for bid is a colored engraving of Mexico City titled Vue de la Ville du Mexique Prise du Coté du Lac (Lakeside View of the City of Mexico). It represents the European vision of Mexico City, depicting buildings, squares, and chinampas (small gardens the style of which is found primarily in Mexico). This rare image of Mexico City is based on stories of European travelers, and thus represents a time and a place that is based both on reality and myth. Take a closer look at these and all lots of this auction and register to bid on Bidsquare.