Attic Decoys by Robert Elliston Return to Guyette and Deeter 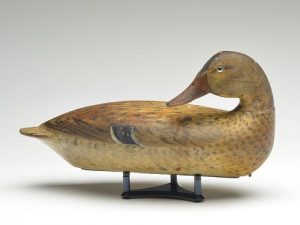 In July of 2009, a young couple found several decoys in the attic of an Indiana house they were remodeling. The factory markings on the decoys led them to collector Joe Tonelli, who was able to identify the works and provide information. Some of the attic decoys bore markings from Robert Elliston and were sold at auction to collector and former Illinois Governor Jim Thompson. The Elliston decoys purchased by Thompson have now returned to Guyette and Deeter for the second session of the upcoming Spring Decoy & Sporting Art Sale. Featured in the Elliston group is a back preening mallard hen with original paint and rubbed feather detailing by Catherine Elliston.

Other decoys in the sale include a swimming greenwing drake by John Blair, Sr., a walking greater yellowlegs by Elmer Crowell, and an emperor penguin by Charles Hart. Hart is known for his carved penguins that he sold to tourists and gifted to friends. Though most of his carved penguins were less than 12 inches tall, the emperor up for bid is comparatively monumental at 33.5 inches and was used as an outdoor porch ornament. View any of these decoys and register to bid on Bidsquare.