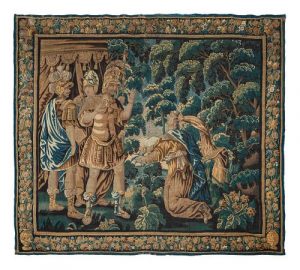 In his early years, Georg Jensen apprenticed as a goldsmith under a firm called Guldsmed Andersen. Jensen would eventually become a noted Danish silversmith who began the Copenhagen company that bears his name. As he traveled through Europe, he embraced the prevailing Art Nouveau style, which would influence many of his company’s works. The second session of the upcoming Atlanta Collections sale, presented by Hindman, will feature an acorn patterned silver flatware service from Georg Jensen.

Another highlight of the auction is an oil painting attributed to Eugene Verboeckhoven, a well-traveled Belgian artist who visited Great Britain, Germany, Holland, and beyond. During these trips, he captured landscapes, animals, and figures in his journals so they could be included later in his paintings. Also available in the sale is a pair of Egyptian Revival parcel-gilt and polychromed throne chairs and a diamond and gold-mounted jadeite egg. View more items and register to bid online on Bidsquare.