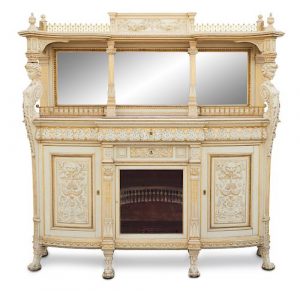 The Atlanta Collections Auction, offered by Hindman Auctions, is a mix of art, furnishings, collectibles and more. The auction has several pieces in Louis XV style of architecture and decorative arts that appeared during the reign of Louis XV (France). From about 1730 until about 1750, the styles became increasingly decorative and exuberant, in what was known as the rocaille style, under the influence of the King’s mistress, Madame de Pompadour, and marked the beginning of the European Rococo movement. One example of this style is a highly-valued, ornate, gilt-bronze-mounted, tulipwood salon table with an expected final bid of at least $15,000.

Of the fine oil on canvas works is an original by Francois Brunery (Italian/French, 1849-1926) titled The Latest Gossip. Brunery was born in Turin, Italy and studied with Jean-Léon Gérôme and Léon Bonnat, and was considered an academic painter associated with anti-clerical art. In 1903, Brunery received an honorable mention for his work at the Paris Salon.

One example of more recent art is an etching titled 0-9 by Jasper Johns. Johns is an American painter, sculptor and printmaker associated with abstract expressionism, Neo-Dada, and pop art. His works regularly sell for millions of dollars, including a reported $110 million sale in 2010. At multiple times, his works have held the title of “most paid for a work by a living artist.” The etching on sale is signed, dated and numbered 71/100 in pencil. View any of these lots and register to bid on Bidsquare.