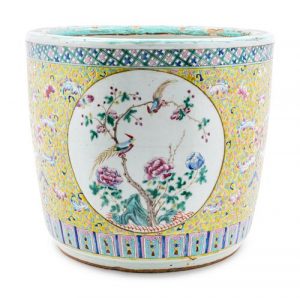 The Asian Works of Art Auction, offered by Hindman Auctions, is a collection of fine and decorative art representing China and other Asian cultures throughout the years. The lots range from a 20th-century abstract painting of a region south of the Yangtze River to 19th-century snuff bottles.

Wu Guanzhong was a 20th-century Chinese painter. Many considered him the founder of modern Chinese painting. His work was influenced by movements all across the world, including Fauvism, Impressionism, and traditional Chinese calligraphy. Guanzhong’s painting “Bridges and the City” captures the artist’s unique blend of influences. Jiangnan, another painting by Guanzhong, available in this auction represents an even more abstract piece by the artist.

In the 19th century, the Chinese government allowed citizens to own and use snuff (powdered tobacco). Many Chinese people believed snuff was a legitimate treatment for colds and other ailments. A rock crystal snuff bottle is among the most notable lots in this auction. The bottle depicts two sisters reading in a day bed. Those looking for a more affordable lot should consider the red, porcelain snuff bottle. The piece is decorated with numerous Shòu (longevity)characters.

Outside of China, bidders should consider a Khmer sandstone torso of Vishnu. The sculpture was produced in the Angkor Wat style and was made in the 12th century. Bidders can register and view each lot on Bidsquare.