Art of the West Signature Auction

The Art of the American West Signature Auction, offered by Heritage Auctions, includes a variety of Western works with diverse styles and subjects. Among the featured lots are the paintings of Robert Pumelli, including his oil on canvas piece titled Santa Fe Trappers Leaving Bent’s Fort. Bent’s Fort was the heart of the regional fur trade on the Santa Fe Trail between Missouri and Mexico. This painting depicts the trappers and their horses, weighed down with supplies, heading out on the trail.

Though there are many examples of traditional oil paintings up for bid, there are also several more contemporary pieces, including works by John Nieto. Nieto’s Standing Elk III depicts his subject in bright, modern colors and broad brush strokes. There are several Nieto works in this auction, including four of the same subject: Apache I, II, III, and IV. Each painting has a different color background and a slightly different representation of the figure.

Another contemporary work is a landscape titled Mountain View by Oscar Brousse Jacobson. Both the colorwork and flattened depth of this painting indicate a somewhat Surrealistic style, depicting a near-pastel sunset behind a mountain scene.

Beyond paintings, there are also a few sculptures available in the event, including a bust by Gallagher Rule. Though Rule was not a full-time artist (he and his brother owned a cattle insemination service in Oklahoma and Kansas), he devoted much of his attention to sculpting by 1973. Rule’s favorite subject was American actor John Wayne.

Other artworks in the auction include pieces by William Schenck, Eyvind Earle, James Reynolds, Nick Eggehofer, Robert Farrington Elwell, and others. View any of these lots and register to bid on Heritage Auctions. 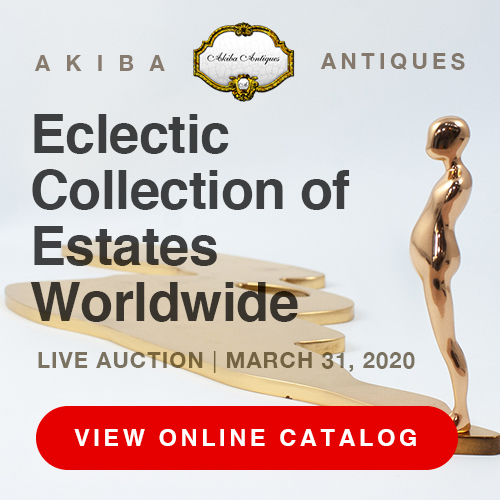 Christie’s will offer the online Wine and Spirits auction through early April, presenting over 800 lots...

Johan Rohde began a long and significant collaboration with the Georg Jensen Silversmithy after commissioning several...

Heritage Auctions will highlight a 1795 one-dollar draped bust coin in the upcoming online auction. This...