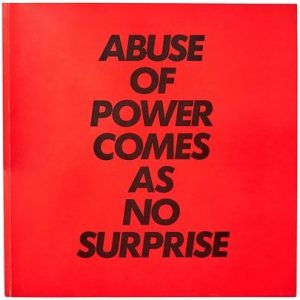 “I used language because I wanted to offer content that people – not necessarily art people – could understand,” said Jenny Holzer, explaining her use of text-based art. Holzer is an American Neo-Conceptual artist noted for her public art. She rose to prominence shortly after her Truisms series of the late 1970s. Among her popular works is a quote that reads, “Abuse of power comes as no surprise.” This particular piece is available as a poster and matching artist’s book in the upcoming Art / Design + Rare Ephemera event, offered by Vallot Auctioneers. The line has appeared on billboards, posters, LED screens, and light projects across the United States.

Other key lots in the sale include a gouache on paper piece titled Male Figure. This work is from Eric Fischl, an American painter, sculptor, printmaker, draughtsman, and educator. Recognized for his figurative paintings, Fischl mainly depicts themes of suburban adolescent sexuality and voyeurism. Additional highlights include works from Betty Woodman, Arnold Blanch, and Alexis Rockman. For more information, visit Bidsquare.