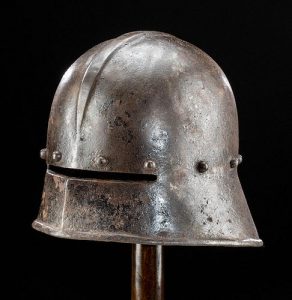 Nephrite, a type of jade, occurred naturally in remote parts of the South Island, whence it was traded and exchanged throughout New Zealand, barter, and war. Due to its rarity and beauty, nephrite was used to make valued ornaments and working tools, such as adzes, chisels, and short clubs. Even though the adzes were mostly used for various utilitarian and agricultural practices; nephrite adzes hold ceremonial significance. These were carried as a symbol of rank or leadership. An early 19th-century nephrite adze highlights the upcoming event, presented by Artemis Gallery. This adze features a bulbous central body, and a nephrite adze blade wedged tightly within the head’s forked gap.

The auction offers several lots of ancient armors. Featured among them is a German helmet frame of the Spangenhelm, belonging to the 6th-century. Spangenhelm, a German word, consists of two words, “spangen” and “helmet”. Spangen was the frame of the helmet that consisted of thick metal strips. It was used as a combat helmet in early medieval times. The available piece has a thick horizontal headband with riveted ends and several rivet holes. Also available is Mexican leather ammunition 46 thick leather loops, used to hold individual rounds of ammunition. View these lots and register to bid online on Bidsquare.