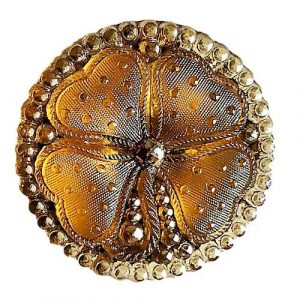 The ornamental use of Scarabs in ancient Egypt involved using them as charms in different forms. The Gay 90 button offered on day two of Whitley’s Auctioneers is among the rarest of buttons. Scarab or bugs buttons are always sought after and the one offered in this auction has a“frog” on it which makes it more valuable. With a central body made of popper glass, the brass button also has many intricate details.

Motiwala Brothers is a popular name worldwide among button makers and collectors for their traditional designs and ivory painted buttons. These Deccan buttons are often sought after for their pictorial designs and bright colors. Whitley’s Auctioneers presents a limited-edition set of 12 intaglio glass zodiac silver buttons by Motiwala Brothers depicting their art. This set was said to be only one of 6 that were made. Other highlights include Arita porcelain buttons and a Battersea pictorial enamel button. Collectors can also bid on historic 18th century buttons and a large selection of handkerchief corner buttons. Explore the full listings and register to bid online on Bidsquare.