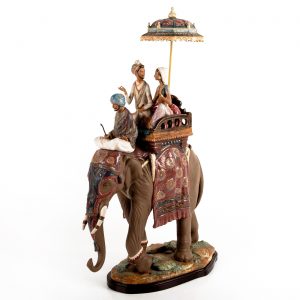 Leading the second day of the sale is a Lladró figure grouping from 1982. It depicts three figures sitting on top of an elephant. A man and a woman sit side-by-side, seemingly engaged in animated conversation. This limited-edition piece is part of Lladró’s Historical Collection, launched as the brand expanded into Southeast Asian markets in the 1980s. Other available Lladró pieces include a 25-pound charcoal bust designed by José Puche, various porcelain figurines of flower-bearing angels, and a pair of ballerinas leaping over a wooden base. The upcoming sale includes porcelain items from other leading brands and designers.

Swarovski collectors will find several pieces made in collaboration with Disney. The companies share “a vision that brings magic and joy into the world,” according to Swarovski. The Austrian glass producer transforms icons of animation into collectible crystal figures. Available in the auction catalog is a sapphire blue crystal Eeyore, an amber-colored Tigger, a dancing Cinderella, and a mischievous Peter Pan figurine made by Swarovski and Disney. Items from Manifattura Artistica Porcelain, Sèvres, Royal Winton, Lalique, and Waterford will be on offer as well. Visit Lion and Unicorn for the complete catalog and to place a bid.