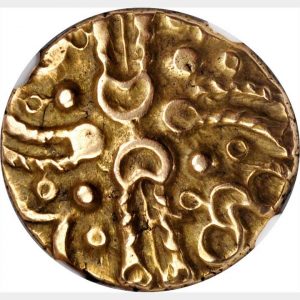 Lydia was a well-known center for trade and commerce and was also considered one of the first kingdoms in the world to issue coins, called staters, as currency. They were first introduced to the Lydian empire during the rule of King Alyattes between 619 and 560 BCE. The Lydian stater was primarily composed of electrum, a natural alloy of gold and silver. They were later altered to be pure gold. The upcoming Stack’s Bowers Galleries auction highlights a Lydian stater made between 561 and 546 BCE. The coin features a lion with raging teeth, roaring at a bowed bull.

Among the Roman Empire coinage showcased is an aureus of Maximian. During Maximian’s rule, many emperors opted for dual leadership to solve disputes and share the workload. In the dual system coinage, the leader with dominance and control used the symbol of Jupiter. The emperor performing the courageous tasks was assigned the symbol of Hercules. The available  286 – 310 CE aureus features the laureate Maximian in draped and cuirassed bust on the front. On the reverse is a seated Hercules with a club, quiver, and bow. The auction also offers ancient Egyptian, Persian, and Italian coins. Interested collectors can explore the full listings and register to bid online on Stack’s Bowers Galleries.