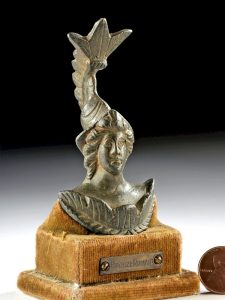 The ancient Egyptians respected the ibis (a species of bird) enough to mummify them. The Egyptians associated the birds with Thoth, the god of wisdom and writing. A mummified ibis is available in the upcoming Ancient, Asian, and Ethnographic auction presented by Artemis Gallery. Like the mummified bird, most of the 173 lots in this auction offer a look into previous civilizations.

The mummified ibis comes with an x-ray showing the bird nestled within the textiles. Both the x-ray and the bird were previously part of a collection at MacMurray College in Illinois. There are several other pieces available in this auction from the ancient Egyptians, including part of an Egyptian coffin lid. The lid fragment is made of sycamore wood. There are small amounts of brown and green pigmentation on the coffin, a peek into what the coffin looked like centuries ago.

Beyond the ancient Egyptians, there are many other civilizations represented in the upcoming auction, including pottery from the early Americas and Southeast Asia. A Mayan vase is among the most notable pieces. A scene carved on both sides of the vase depicts a lord with a necklace and skirt. Vases, such as this one, were originally given to high-ranking visitors to introduce them to Mayan culture. To this day, they showcase the mythology and priorities of the Mayan people. Those interested in any of these pieces can register to bid online at Bidsquare.