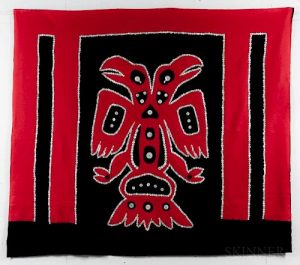 Plains Indians used catlinite claystone for pipes or ritual items because of their vibrant color. “It ranges in color from pale pink to brick or blood red,” says Rocks and Minerals, “and normally has small lighter spots – referred to as ‘stars’ – scattered throughout.” An example of a catlinite ritual item is available in the upcoming American Indian & Ethnographic Art auction, offered by Skinner. The piece is referred to as a “war club,” but Skinner notes that the delicate nature of catlinite means the club was most likely used as part of a ritual rather than in actual battle. The club’s end is decorated with birds, elk, and buffalo.

Unlike the catlinite club, a Plains Indian pipe tomahawk available in this auction was meant for the battlefield. This lot has the highest estimated value in the auction and, despite its use in battle, contains several decorative features worth noting. Brass tacks encircle the tomahawk’s pipe in seven different places, and there is a heart-shaped cutout on its blade.

While several of the auction’s featured lots are from the Plains Indians, the auction’s 624 lots are not exclusively pieces from Native American tribes. Civilizations across Oceania, Southeast Asia, and other regions are represented. Available in this auction are two woven bags from New Guinea. The bags are decorated with boar tusks and feathers from cassowaries, flightless birds similar to ostriches and emus. Also featured is a Java dance theater mask. The wooden mask’s prominent features include an exaggerated nose and eyes. To view these lots and many more, register to bid on Bidsquare.