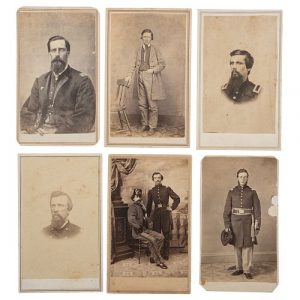 Cowan’s presents the American Historical Ephemera and Photography Auction, which includes 55 lots highlighting the African American experience. Over 175 pieces from the Civil War era and 60 items from early life in the American West will be offered as well. One of the featured lots is an archive of more than 320 handwritten letters, most addressed to Rear Admiral Christopher Raymond Perry Rodgers (1819-1892), a career naval officer. The correspondence spans the 1840s through the 1890s with approximately 75 recipients. The substance of the letters describes naval activities in the Indian, Mexican-American, and Civil Wars.

The auction also contains photographs, daguerreotypes, ambrotypes, CDVs, and large-format photographs, many with African American and Civil War subjects. One highlighted lot presents the Civil War archive of John Merritt Morse, NH Third Infantry and US Army Signal Corps. The archive contains 145 letters, as well as 11 portrait CDVs of identified soldiers. Other items in the sale include a period tintype of Abraham Lincoln (the “Beardstown Portrait”), a group of boudoir photographs by A.F. Randall at Fort Bowie, two portraits of Sojourner Truth, and more. View any of these lots and register to bid on Bidsquare.