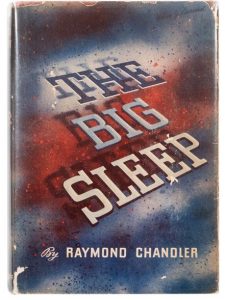 In 1939, Raymond Chandler published his novel The Big Sleep. The first to feature hardboiled detective Philip Marlowe, the book later inspired a classic film by the same title starring Humphry Bogart and Lauren Bacall. A first edition, first printing copy of this American classic is currently up for bid in the Fine Books & Manuscripts auction, presented by Potter & Potter.

A two-volume set of Uncle Tom’s Cabin is also among the offered American classics. It includes a signed note by Harriet Beecher Stowe that reads “Thanks be unto God who giveth u[s]/ The Victory.” Collectors can also consider a first American edition of Huckleberry Finn by Mark Twain, a signed author’s edition of the Works of Arthur Conan Doyle, and more.

Beyond books, the sale also includes an original black and white pictorial placard from the Chicago March for Freedom led by Martin Luther King Jr., A. Phillip Randolph, and Ray Wilkins. The catalog offers signed original letters by James Baldwin, Albert Einstein, and Dashiell Hammett. View any of these lots and register to bid by visiting Potter & Potter.