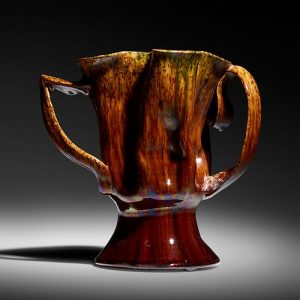 Adelaide Robineau was an American ceramicist popular in the early 20th century. Robineau initially learned her craft from the American Impressionist artist William Merritt Chase. She learned to make high fire porcelain after spending just a few weeks in pottery school and reading various Sévres porcelain articles. The upcoming auction, presented by Rago, features a centerpiece by Robineau. The 1926 work is coated in her self-developed glaze and decorated with hand-carved frogs.