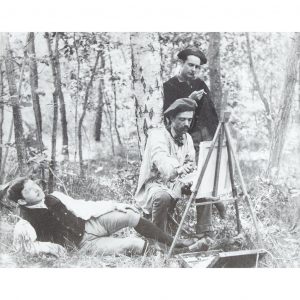 Antonio Pietro Martino was an American painter born in Philadelphia, Pennsylvania. Martino was initially interested in sculpture but later shifted to drawing and painting after attending lectures at the Graphic Sketch Club. During the 1930s, Martino’s paintings focused on landscapes in the Manayunk region of Pennsylvania. The upcoming auction, presented by Freeman’s, features several works by Martino. Leading these is an oil painting titled Street Scene, Manayunk.

The auction also offers Cockatoos, a watercolor, gouache, and ink on paper work by Impressionist artist Jane Peterson. Her paintings often use broad patches of color that emphasize the light. Another Peterson work available in the sale, titled Water Lilies, shows several flowers rising from a blue and green body of water. Also presented are charcoal sketches such as Woman with Hat and Cape by Theodore Robinson. The auction includes works from Walter Emerson Baum and John Winters as well. Interested collectors can explore the full listings and register to bid online on Freeman’s.