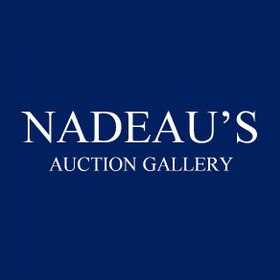 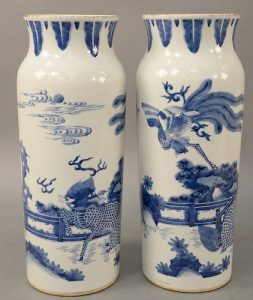 The lot with the highest estimated value in the upcoming American Antique, Fine Art, and Asian auction, presented by Nadeau’s Auction Gallery, is a piece by Alfred Von Wierusz-Kowalski. Kowalski was a member of the Munich School movement, and much of his work focused on the activities of everyday people. His painting in this auction depicts two peasants on a horse-drawn carriage. Another featured lot, albeit with a much lower estimated value, is a Japanese coral figure of the Seven Lucky Gods (Shichi-Fuku-Jin). Each of the gods was once worshiped separately, but are now always depicted together. From peasants in a carriage to lucky gods, these two lots represent the diversity of pieces in this upcoming auction.

Those looking for 19th-century pieces beyond Kowalski’s painting should consider James Carrol Beckwith’s “Pierrot”. The idea of the pierrot, or sad clown, became popular in the 19th century through comedies and pantomimes. The subject of this portrait wears some of the embellishments of the pierrot but does not wear the pierrot’s usual makeup and instead looks upon the viewer with a bare face.

Like the Seven Lucky Gods, another Japanese lot with a high estimated value is a pair of Nagasaki lacquered knife boxes. Wildflowers and birds decorate the exterior of the boxes. This piece of everyday Japanese living from either the 18th or 19th century comes to auction from an undisclosed estate in Sutton Place, New York City. Those interested in any of these pieces can register to bid on Bidsquare.