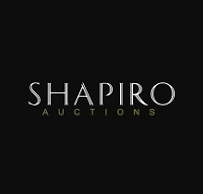 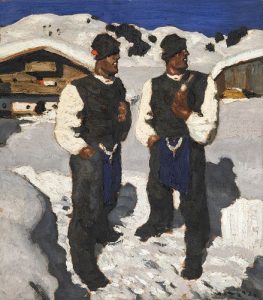 Day One of the International Fine & Decorative Art sale, offered by Shapiro Auctions, features works from the former Eastern Bloc and Russia. Among the key lots up for bid is a painting by Austrian artist Alfons Walde titled Bauernsonntag (Farmer Sunday). The painting shows two eerily similar men standing in the snowy town of Kitzbuhel. Walde was known for his Alpine landscapes, and collectors of his work will recognize elements of his unique style in this painting.

Several Russian porcelain pieces, including a pair of Russian imperial crater vases, lead the decorative art offerings. These vases resemble a design sketch by August Spiess, who was a 19th-century designer for the Imperial Porcelain Manufactory. His designs often referred to the work of Renaissance masters, as was common in Russian Imperial pieces from that period. An abstract painting by Julije Knifer, a variety of photographs of historical figures such as Albert Einstein and John F. Kennedy, and fine art pieces from Vietnamese artists will be available as well. View any of these items and register to bid on Bidsquare.