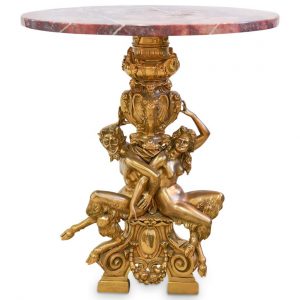 Though the Baroque style originated in Italy, its influence gradually spread throughout Europe during the 18th century. The Baroque style is best known for its intricate details that offer both movement and curved lines. An example of the style will highlight Akiba Antiques’ upcoming Spring Classic Collection sale. The offered piece is a 19th-century table accented with a figural gilt bronze base. A scene featuring a satyr and satyress decorates the base.

Another 19th-century piece featured in this event is a Limoges enamel-painted plaque. Inspired by the late Gothic style, this work depicts a religious scene of Veronica wiping the face of Jesus. Painted in grisaille tones, it is finished with a gilt script that reads “Jesus Impria SA Saint Face VI.” Other notable artists represented in the sale include Antonia Eiriz, Pierre Jules Mene, R. Martinez, Rene Portocarrero, F. Zuniga, Mel Rosas, and Carlos Quintana.  Find the full catalog and place a bid on LiveAuctioneers.