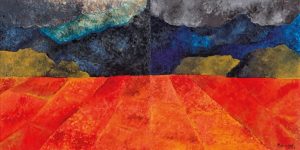 Also highlighted in the live sale is Tyeb Mehta’s Figure. In 1959, Mehta moved to London and encountered European Modernism. His style then experienced a shift. Mehta’s works became more dynamic with a muted palette and thick textures. The available lot is one of his early paintings. It shows a seated figure painted in orange and brown hues. Francis Newton Souza’s The Cardinal and Sayed Haider Raza’s Paysage are on offer as well. View each of these lots and register to bid online with Christie’s.