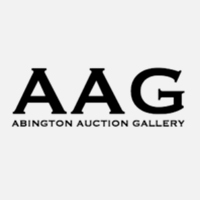 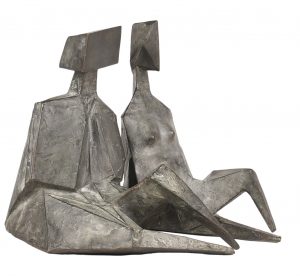 Lynn Chadwick was a leading British post-war sculptor. Trained as an architectural draughtsman, Chadwick started creating mobiles and, later, other natural forms, insects, and animals. By the end of the 1960s, he mostly devoted his time to human figures, the subject later becoming central to his oeuvre. These sculptures were influenced by both Easter Island figures and Greek mythology. The upcoming event, presented by Abington Auction Gallery, Inc., features a pair of bronze sculptures by Chadwick. Titled Pair of Sitting Figures II, the work shows two figures with symmetrically folded legs.

Also among the leading lots is an oil painting from Allen Jones. A British Pop artist, Jones is best known for his paintings and sculpture. His work is characterized by its suggestive imagery and provocative poses. Titled The Art of Allusion, the offered work depicts three figures in various positions. Beyond fine and decorative art, the auction also includes a collection of jewelry, furniture, and rugs. Browse the full catalog and register to bid on Bidsquare.