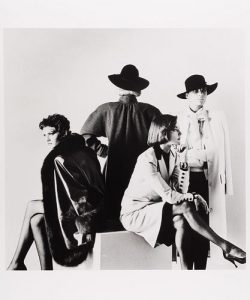 Helmut Newton was a prolific artist famous for his black-and-white nude photographs. Newton developed an interest in photography at an early age and learned the craft from the prominent German photographer Yva. He later went on to open his photo studio in Melbourne and focused on postwar fashion photography. Newton’s popularity fetched him commissions for publications such as Vogue and Harper’s Bazaar. Explaining the idea behind his provocative photographs, Newton stated, “The people in my pictures have been ‘arranged’ as on a stage. Nonetheless, my pictures are not counterfeit; they reflect what I see in life with my own eyes.” The upcoming 22nd OstLicht Photo Auction features a 1981 photograph collection titled Naked and Dressed, Fashion Models Sitting, Paris by Newton. It shows four models looking in every direction except at the viewer.

Another highlight is Calle Cuauhtemoctzin, Mexico City by the humanist photographer Henri Cartier-Bresson. The gelatin silver print was captured in 1934 when Cartier-Bresson was traveling around Italy, Mexico, and Spain. During his trip, the photographer came up with a new photography technique. It involved capturing human spontaneity and flux using a hand-held Leica camera. Calle Cuauhtemoctzin shows two women leaning out from small, wood-paneled openings. The balanced light image features classic textures, a strong sense of space, and the artist’s skill in capturing intimate moments. The auction also offers 19th-century photographs by Valie Export and William Eggleston, as well as the Apollo 11 moon landing photograph of Buzz Aldrin captured by Neil Armstrong. Interested collectors can explore the full listings and register to bid online on Bidsquare.