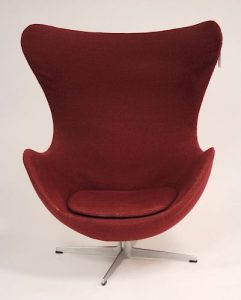 The second day of the upcoming 20th Century Design auction presented by Litchfield County Auctions will feature items from several private estates. Leading the sale is a pair of pickled oak Egyptian side chairs by Marc Du Plantier. Made in 1935, one of the chairs is upholstered in mustard velvet with brass buttons. Du Plantier was inspired by antique furniture’s simplicity and focus on luxurious and unusual materials. He designed interiors for Juan March, Henry de Rothschild, and Ali Khan, to name a few. He also designed sets for La Comédie Française.

Also among the featured lots is a set of Japanese World War II naval binoculars. Built in the mid-20th century, these binoculars were positioned on towers 90 feet high on Japanese warships. These brass and steel instruments have lenses that absorb up to 980 times more light than the human eye, which helps observers view objects up to 20 miles away. Many of these binoculars were built by Nippon Kogaku, a supplier that later became Nikon. Browse the entire collection and register to bid online on Bidsquare .