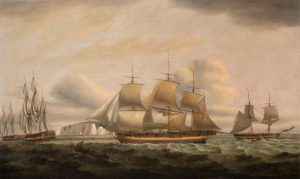 A 19th-century painting by Thomas Luny highlights Doyle‘s English & Continental Furniture, Silver & Decorative Arts auction. Luny was known for his depictions of seafaring and naval battles. His first studio was in the same building as the East India Company, whose officers often commissioned work. The available painting shows four ships and a smaller boat forming a semi-circle around the shore.

Other painters represented in this sale include Lucius Rossi. Influenced by Romanticism, Rossi’s specialty was portraying femininity and flirtatious scenes. These are both showcased in the available Rossi piece, titled The Introduction. A shy suitor approaches four women who look at him with varying levels of curiosity.

Beyond 19th-century paintings, bidders will also find furniture and decorative art pieces. That includes a pair of famille verte porcelain urns. Famille verte is a style of porcelain decoration that was most popular in China during the Kangxi period. This piece, however, was produced centuries later, in the late 19th century. The urns are decorated in blues, reds, and greens typical of the style. Those interested in this or any other piece can register to bid on Doyle’s website.